Superjet 100 is a next-generation regional jet that combines and incorporates state-of-the-art aircraft production technology. The SSJ100 offers exceptional comfort for passengers, significant economic benefits for carriers, convenience for the crew and maximum friendliness for the environment.

May 2000
Closed Joint-Stock Company Sukhoi (JSC SCA) is incorporated to implement projects for the design and production of regional civil aircraft – the first in post-Soviet Russia, able to compete on the global aircraft market. JSC SCA started by designing airliners and gathering a unique multinational team of partners and vendors essential to the implementation of its project named RRJ60/75/95.

December 2002
Upon completion of the bidding process, the contract for the development and delivery of a power generator for the RRJ95 was awarded to the designers of the SaM146 engine (jointly developed by Snecma and Saturn Research and Production Company). The modular SaM146 engine specially designed for the SSJ100 combines and incorporates the successful service experience of the CFM56 with the use of up-to-date technology, along with a 20% reduction in the number of components, thanks to which a considerable reduction in operating and maintenance costs can be achieved along with high operating performance and serviceability levels.

2005
According to a review of the proposed route network completed by airlines, the performance figures of the RRJ60/75 airplane were deemed not to be cost-effective, so development work was continued with the RRJ95 project.

October 2003
As a result of bids for the supply of basic systems for the SSJ100 airplane, key component suppliers were determined, including: Thales for avionics, Messier-Bugatti-Dowty (Safran Group) for landing gear, Honeywell for the auxiliary power unit, Liebherr for flight control systems, Intertechnique for fuel systems, Parker for hydraulic systems, B/E Aerospace for interiors, and other companies.

A branch of JSC SCA in Komsomolsk-on Amur was established for the final assembly of the aircraft. As part of project implementation, a comprehensive re-equipment program was completed at the Komsomolsk-on-Amur and Novosibirsk production sites. New advanced technology that had never been used in the domestic aircraft-production industry before, such as jig-less assembly, automatic alignment of airframe components, automatic riveting and a number of others, were used in its production.

August 2005
A governmental contract was signed for research-and-development work under the Sukhoi Superjet 100 Program within the framework of the Federal Target Program “Development of Russian Civil Aviation in 2002-2010 and Through 2015.”

December 7, 2005
JSC Aeroflot – Russian Airlines is the first customer in the SSJ100 program, purchasing 30 aircraft in the family.

July 2006
The new name of RRJ95 airplanes was announced at the Farnborough International Aerospace Show on July 17, 2006. Since that time, it is has been known as Sukhoi Superjet 100.

August 2007
UAC, Sukhoi, and Finmeccanica, as well as SCA and Alenia Aeronautica, entered into a Framework Agreement for a Strategic Partnership to design and launch the production of Sukhoi Superjet 100 airplanes.

August 22, 2007
The JSC Sukhoi Company and Alenia Aeronautica announced the establishment of a joint venture – SuperJet International (SJI) – to support customization, crew training, global after-sales service and deliveries of the Sukhoi Superjet 100 in Europe, America, Oceania, Africa, and Japan.
In this effort, JSC Sukhoi Civil Aircraft is responsible for the development, certification and production of Sukhoi Superjet 100s, as well as for sales in Russia, CIS countries, China, India, the Middle East, and in Southeast Asia.

September 26, 2007
The first public presentation (roll-out) of a flight model of SSJ100 was held in Komsomolsk-on-Amur.

May 19, 2008
The first flight of the flight model of Sukhoi Superjet 100 was completed in Komsomolsk-on-Amur. The airliner climbed to an altitude of 1,200 meters, made 4 passes over the runway, flew a racetrack landing

January 2011
The Sukhoi Superjet 100 received a Type Certificate from the Aircraft Register of the Interstate Aviation Committee (IAC AR) confirming the compliance of the aircraft type design with the standards of Aviation Regulations, which allowed for the commencement of commercial operation of the airplanes as part of the fleets of initial customers.

February 2012
The European Aviation Safety Agency (EASA) issued a type certificate for the Sukhoi Superjet 100. The certificate confirmed that Sukhoi Civil Aircraft (SCA) had successfully demonstrated the compliance of the SSJ100 with the applicable EASA requirements for airworthiness and environmental impact. The EASA certificate allows European airlines, as well as the airlines of countries that have adopted EASA regulations as standards, to acquire and operate SSJ100 airplanes. The Sukhoi Superjet 100 is the first Russian passenger airplane to be certified in accordance with EASA CS-25 aviation regulations.

August 2013
The Aviation Register of the Interstate Aviation Committee (IAC AR) issued a Supplement to the Type Certificate for the RRJ-95LR-100 airplane – an extended-range version of Sukhoi Superjet 100. The IAC AR Type Certificate enabled the SSJ100 LR’s commercial operation by Russian airlines.

March 2014
Gazprom Avia, the initial operator of the long-range version of Sukhoi Superjet 100, puts an airplane of this type into commercial operation. The first flight was operated from Vnukovo (Moscow) to Sovietsky (Yugra, Russia).

A SSJ100 airplane with a VIP cabin was demonstrated at the Jet Expo International Business Aviation Exhibition.

November 2014
The Aviation Register of the Interstate Aviation Committee (IAC AR) confirmed the possibility of equipping the Sukhoi Superjet 100 with a high-comfort passenger cabin interior. Approval of the major change to the Sukhoi Superjet 100’s type design issued by IAC AR was also proof of the possibility of the safe operation of flights with aircraft of this type with the VIP-arrangement submitted for certification.

Superjet 100 (SSJ) airplanes are able to carry 98 passengers over a distance of from 3,000 km (baseline model) to 4,500 km (extended range version). The Superjet 100 is the only airplane family offering passengers a level of comfort that is comparable to long-haul airliners. The SSJ airplane family meets all of the latest and anticipated requirements of the Russian and international civil aircraft markets.

The design of the airplane satisfies the specific requirements of airlines in Russia, the CIS, Western countries, and meets AP-25, FAR-25, and JAR-25 standards. Airplanes in the Superjet 100 family meet ICAO Chapter 4 noise requirements and FAR 36 Part 4, which became effective as of 2006. SSJ airplanes satisfy the requirements of 99% of all class A, B, and C airfields in Russia and the CIS.

A wind tunnel developed by TsAGI was used in the Superjet 100 design process, allowing for the minimization of drag and optimization of fuel consumption. The new engine, new fly-by-wire flight control system and energy-saving technology also contribute to the airplane’s high cost efficiency.

The approach to the design and production of SSJ airplanes is unique in its own right due to its focus on the needs of airlines. It’s built upon an in-depth analysis of the requirements governing configuration of the airplane and evaluation of the market’s future needs. Thanks to its extended range capability, the SSJ can be used in a broader route network, including a number of long-haul routes, with greater efficiency and high level of comfort. Its cost efficiency rises as the range is extended. The excellent aerodynamics of the Superjet 100 creates great advantages at cruising speed. Improved takeoff and landing performance, along with all-weather operating capability, makes this airplane a “trailblazer” for new destinations. Therefore, airlines will be able to launch services on routes where other airplanes are less efficient or less comfortable.

The optimum fuselage cross section enables aisle extension to 508 mm – even with five seats abreast. Seat width can be up to 462 mm. The Superjet 100 offers more overhead space for passengers. Its ceiling height is 2,120 mm. All this makes it easier for passengers to board and leave the airplane, and for flight and cabin crew to move throughout the cabin. 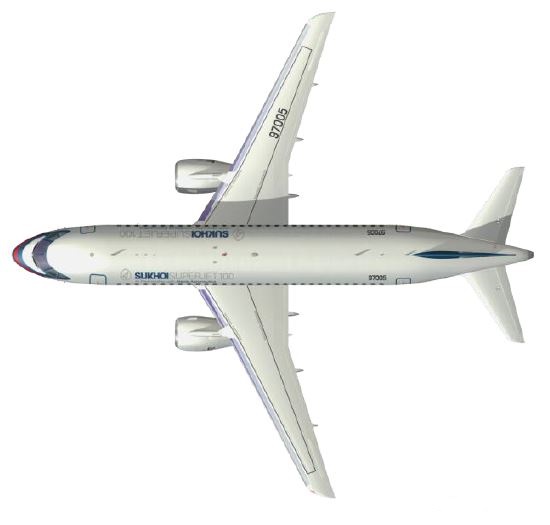