The Su-35 is designed for intercepting and destroying all classes of aerial targets in ranged and close air engagements, fighting for air superiority as well as hitting ground and sea-surface targets including troops and ground infrastructure covered by anti-aircraft weapons and located at a considerable distance from its base airfield.

The Su-35 is a version of the Su-27 fighter that has been deeply modernized to achieve a significant increase in its combat effectiveness against aerial, ground, and sea-surface targets. The design of the Su-35 incorporates the most successful engineering concepts that previously tested well on the Su-27/Su-30 family of airplanes.

This airplane combines the qualities of a modern fighter (super-maneuverability, superior active and passive acquisition aids, high supersonic speed and long range, capability of managing battle group actions, etc.) and a good tactical airplane (wide range of weapons that can be carried, modern multi-channel electronic warfare system, reduced radar signature and high combat survivability). The high combat effectiveness of the Su-35 airplane is achieved through its:

- Ability to operate independently, in a group of airplanes or as part of a battle group controlled from an aerial, ground-based or ship-based command center;
- Single integrated information-management system providing intellectual support to the pilot, which maintains communication and coordination between the crew and avionics equipment;
- Covert attacks on radio-emitting aerial targets at mid- and long-range;
- Attacks on ground and sea-surface targets with guided high-precision missiles without entering air defense zones;
- High target-tracking stability;
- Simultaneous air-to-air and air-to surface operations.

Versions of the Su-27, such as the Su-27M (T-10M) modernized fighters designed and produced on order from the Russian Air Force in the 1980s, had been demonstrated at international air shows under the name Su-35 since 1992. Their production was stopped due to a lack of financing in the 1990s. At the turn of the century, a review of the national Air Force’s needs for the foreseeable future, as well as global aircraft market forecasts, identified the requirement for a more radical modernization of the Su-27, building on the foundation that had previously been laid.

To make the airplane competitive compared to existing and future foreign fighters, it was required not only to significantly improve airborne equipment and weapons, but also to alter the airframe structure and power generation. As a result, the general concept of a new multi-purpose fighter – a thoroughly-modernized version of the Su-27 airplane – was generated by the middle of the first decade of the new century, retaining the name Su-35. Work on this project at Sukhoi Design Bureau was led by I. Demin.

The Su-35 is a “4++” generation airplane that uses fifth-generation fighter technology. In 2009-2015, this technology created an advantage for the Su-35 over the other fourth-generation multi-purpose fighters offered on the global market. The new Russian fighter was designed so that it could fly and fight in conditions where "classic" (4+ generation) fighters were unable to engage in combat. It was envisioned that this “major modernization” would fill the gap between the Su-27 airplanes built or modified with “minor modernizations” until the production launch of fifth-generation airplanes, expected to enter the market within a decade.


The first flight model of the Su-35 airplane was assembled at the KnAAPO production site in August 2007. On the eve of the MAKS-2007 Moscow Air Show, it was transported on board an An-124 Ruslan heavy freighter to the Gromov airfield in Zhukovsky where, after its demonstration at the show, the final stage of ground tests continued prior to commencement of its flight testing stage. Tests of all five of the 117S-type engines from the test batch intended for installation on the Su-35 were completed successfully at a branch of NPO Saturn near Moscow in January 2008. Ground testing of airplane systems was completed by the middle of February.

The first flight of the new Russian fighter took place on February 19, 2008. The flight was piloted by Sergey Bogdan, Honored Test Pilot of the Russian Federation. The importance of the event was emphasized by Russian President Vladimir Putin’s and his then-future successor Dmitry Medvedev’s visit to the test site on February 20.

The key expected performance values were demonstrated and confirmed through flight tests. The second test item entered testing on October 2, 2008. Along with the new fighter’s entry into service and acceptance by the Russian Air Force, as well as its emergence on the global aircraft market, the aircraft continues to reinforce Russia’s position as one of the leading aviation powers of the 21st century.

In the Su-35’s design process, the Sukhoi Design Bureau departed from aerodynamic design using the nose canard that had been used in the design of the Su-27M, Su-33, and Su-30MKI fighters and reverted to the proven classic aerodynamic design of the Su-27. The technological advances achieved at the beginning of the new decade made it possible to exclude a nose canard from the design while retaining the advantages it provided.

The airframe saw changes that enabled an increase in the airplane’s assigned service life and flight duration, the accommodation of a larger amount of fuel as compared to the Su-27, as well as the installation of new airplane systems and avionics. The design and arrangement of the fuselage nose section was also changed. Airbrake functions were transferred to differentially-deflected rudders whose design was also modified.

The structure (including major elements of the fuselage, wing, stabilizers, and landing gear) of the Su-35’s airframe was reinforced, enabling an increase in the airplane’s maximum takeoff weight. That made it possible to significantly increase the amount of fuel on board (as the Su-35 carries 11.3 tons of fuel in its integral fuel tanks while the Su-27 carries just 9.4). Along with this, the fighter is equipped with a flight refueling system and can carry drop tanks with a 2,000 liter capacity each. The payload remained the same as in the Su-27: 8 tons. The number of hardpoints grew from 10 to 12.

The “117S” type power generator with deflectable thrust nozzles, developed by Saturn Research and Production Company (NPO Saturn), has 16% higher reheated thrust than the “AL-31F” engine. The assigned service life of these engines was extended to 4,000 hours. The unique “KSU-35” digital integrated remote-control system with quadruple redundancy designed by MNPK Avionika, which performs the functions of several systems at the same time (including thrust vector control), not only improves the airplane’s flight control and maneuvering performance, but simultaneously performs active safety functions as well.

The most important difference between the Su-35 and ”4+” generation fighters is its fifth-generation avionics. The Irbis-E radar station with rotating phased antenna array designed by the V. Tikhomirov Research Institute of Instrumentation provides for the assured detection and acquisition of typical aerial targets at a range of up to 200 km (up to 170 km against ground background), and in a narrower field of view¬ – up to 350-400 km. The Irbis-E is able to track up to 30 targets at a time and guide missiles at 8 of them, without an interruption in airspace surveillance. The radar control system also provides for the selective acquisition of moving ground targets and cueing for low-level missions.

The second information channel of the weapons control system is a multi-channel infrared search-and-track system with high sensitivity and jamming resistance. It detects and tracks targets using thermal signatures at a range of up to 90 km, and also can find the range to a target (with a maximum range of 20 km for aerial targets and 30 km for ground targets). The infrared search-and-track system can also be used for illuminating ground targets to guide missiles with laser seekers. Its suspended optoelectronic unit extends the flight-control and flight-navigation capabilities of the airplane in air-to-surface mode.

Data display and navigation equipment was developed by the Ramenskoye Instrumentation Design Bureau and other member companies of SPC Tekhnokompleks in conjunction with the Moscow Institute of Electromechanics and Automatics. The integrated airplane control and navigational equipment in the cockpit is designed according to principles geared towards the optimal display of information. The data display system uses wide-screen, color, multi-functional displays and a wide-angle, color, heads-up display system, where panning terrain-map display capabilities are also provided. Cabin lighting equipment supports pilot operations with night vision goggles. The “dark cockpit” principle is implemented to reduce workload (with display of advice messages in an emergency). The pilot is also provided with a helmet-mounted pointing-and-aiming system and a set of emergency escape equipment.

The weapons control system makes the airplane able to use nearly all modern, guided and unguided, domestically-produced aviation projectiles. The Sukhoi Design Bureau, in cooperation with academics and industry researchers, discovered ways to radically (by more than 5-6 times) reduce the airplane’s radar signature, which significantly reduces the range of its detection by enemy airborne radars and ground radar stations.

The airplane’s combat survivability is assured through two spread out engines, the multi-channel redundancy of all airplane systems, the protection of fuel tanks from explosion, as well as an electronic countermeasures system. The electronic countermeasures system comprises: an active jammer for group and individual/mutual protection, anti-radar missile guidance equipment, a radar and laser irradiation and incoming-missile alerting system, as well as an automatic dummy dispenser. 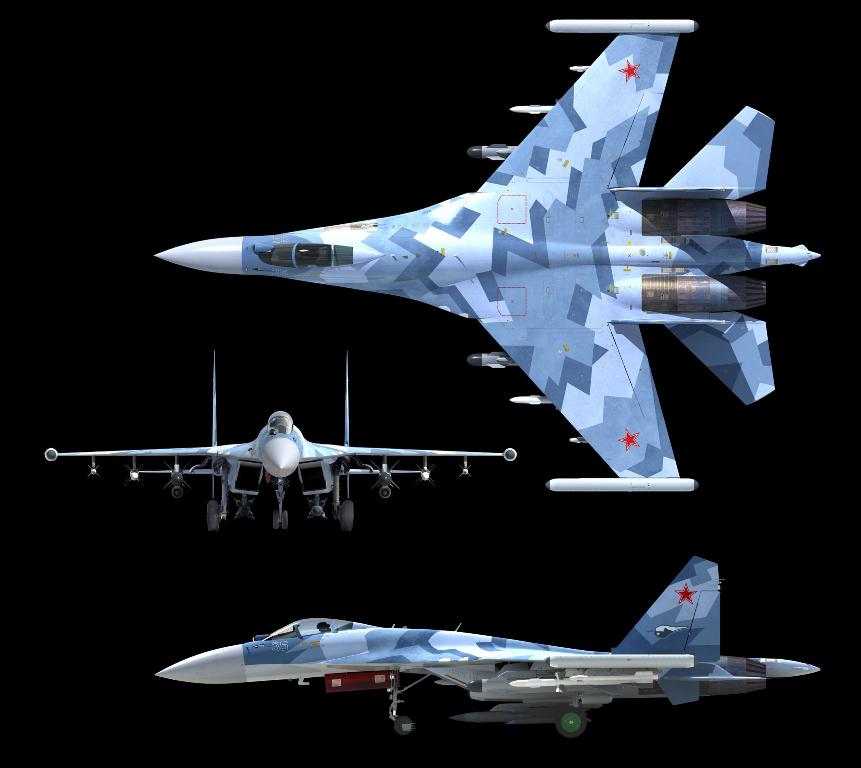