Tu-95MC, created as a carrier of new weaponry – strategic long-range cruise missiles, was launched into serial production in 1981. It is a modification of Tu-95 strategic bomber that entered into service with the Soviet Strategic Air Force in 1957. The Tu-95MC aviation-missile complex is currently in service with the Russian Air Force and has a considerable modernizing potential in terms of installation of more effective missiles and new equipment.

Development of the Tu-95 started back in the late 1940s, when A. Tupolev and some other designers were tasked with the creation of a bomber that would be able to take off in the USSR, reach the United States of America, and then return. The Tupolev Design Bureau (designated as OKB-156) proposed equipping the first airplane with turboprop engines, which were more efficient than turbojets. The Tupolev Design Bureau mounted an effort to create a strategic bomber with an intercontinental range in the early 1950s. The coordination of engineering work for this project was provided by Nikolai Bazenkov, A. Tupolev’s Deputy and the Chief Designer of the Tu-95 airplane.

The Design Bureau’s test pilot, A. Perelet, piloted the airplane on its first flight on November 12, 1952. Production of the Tu-95 was launched at Kuibyshev Aircraft Plant (now – Samara Aircraft Plant) in 1955. The total number of airplanes produced exceeded 500. The Tu-95 entered service and was accepted by long-range aviation units in September 1957.

The specialty of the new airplane was the use of its backswept wing and, most importantly, turboprop engines, which were installed for the first time ever on airplanes of such a class. The unique NK-12 turboprops, designed by N. Kuznetsov, with opposed multi-blade airscrews designed by K. Zhdanov, had no rivals in terms of power and efficiency across the whole flight envelope.

The main caliber of the new version of the “Bear” (as the Tu-95 was dubbed in the West) was the X-20 missile with nuclear warhead, able to hit targets at a range of up to 600 kilometers. The missile was guided towards the target by radar beam. Despite the large size of the X-20 (the airplane could carry only one such missile) and moderate accuracy of the weapon, the airplanes produced in 1958-1962 remained in service until the late 1980s and saw several modernizations.

Tu-95s were deployed not only in the USSR but also to airforce bases in Cuba, Guinea, Angola, Somalia and Vietnam. This allowed the USSR’s Strategic Command to effectively control nearly any area in the world. All Tu-95s were withdrawn from overseas bases by the beginning of the 1990s.

The development of improved versions of the Tu-95, which were provided with better airborne equipment and guided weapons making them able to hit targets without entering the enemy Air Defense Zone, began at the very start of its production.

The Tu-95K was the first missile-carrier in the Tu-95 family, and its production started in 1958. The missile carriers had some avionics upgrades in the mid-1960s, after which they were designated as Tu-95KM. The airplanes received enhanced X-20M cruise missiles with maximum launch ranges of 600 km. The Tu-95M, a further development of the Tu-95 with improved NK-12M engines, completed its first flight in 1957.

In total, 31 Tu-95s and 19 Tu-95Ms were completed at the production site in Kuibyshev from 1955 to 1958. Later, all Tu-95 bombers would be modified to version Tu-95M. These airplanes stayed in service until the mid-1980s, after which some were converted into Tu-95U operational training versions and operated until the early 1990s.

Several airplanes used for special applications were designed based on the Tu-95 in the 1960s: the Tu-95RTC oceanic reconnaissance airplane, the Tu-126 airborne early-warning aircraft, and the Tu-142 long-range ASW aircraft. The Tu-95RA strategic reconnaissance aircraft with electronic and photo-reconnaissance equipment was designed in 1964. The airplane was the first of the “nine-fifths" family to be equipped with a probe-and-drogue-type flight-refueling system.

Work to design and produce the X-55 compact strategic aircraft-launched cruise missile was started by the Raduga Machine-Building Design Bureau under the supervision of General Designer I. Seleznev in the early 1970s. A modernized version of the Tu-142M, designated as Tu-142MS, was proposed as the platform for this new weapon. Engineers from the Central Institute of Aero-Hydrodynamics (TsAGI) contributed to development of this airplane’s concept. The Tu-142MS was initially seen as an alternative to the more complex and costly Tu-160 multi-modal bomber, which was also equipped with cruise missiles. Later, the decision was made to continue work under both programs in tandem.

Production refurbishment of the Tu-142M airplane into a fully-functional missile-launching aircraft equipped with a full set of equipment and weapons started in July 1977 and was completed in September 1979. The modernized airplane took off for its first flight on July 31. The airplane, designated as the Tu-95MC, made its first flight in September 1979, and production of the new missile-carrier was launched at Taganrog Aviation Plant in 1981. Production was transferred to Kuibyshev (now Samara) in 1983.

The produced Tu-95MC set 60 speed and payload-altitude records in 1989. Work to design and produce a next-generation strategic bomber intended to replace Tu-95MC airplanes was started in the USSR in the 1980s. However, due to the collapse of the Soviet Union, followed by the economic crisis in Russia and the resulting cut in defense allocations, work to re-equip long-range aviation with new airplanes slowed down. In such conditions, modernization of the existing long-range aircraft fleet was given top priority.

Tu-95MC production continued until early 1992. Various versions of the airplane had stayed in service in the long-range aviation fleet and in the Navy until the collapse of the USSR. After that, the fleet of Tu-95 was split between the Air Forces of Russia and Ukraine. The Russian Air Force currently has 28 Tu-95MC-6 airplanes and 35 Tu-95MC-16 airplanes. Ukraine owns the other 23 airplanes. However, those airplanes have not found application in Ukraine and have acquired “mothball” status.

Due to its ease of operation and maintenance, as well as its reliability, the Tu-95 has remained in service even after the entry into service of the new Tu-160 which, although a much more advanced missile carrier, required costly servicing infrastructure to be created to support its operation.

The Tu-95 airplane is made according to a normal aerodynamic design with a high-positioned cantilever three-spar wing. Such aerodynamic design ensures high aerodynamic performance at high flight speeds. The improvement in performance has also been achieved through high wing aspect ratio, appropriate choice of the sweep angle, and the set of airfoils along the span. The Tu-95MC’s power generator is comprised of four NK-12M (MV) turboprop engines generating power at 4 x 15,000 h.p. with AV-6ON opposed four-blade airscrews. 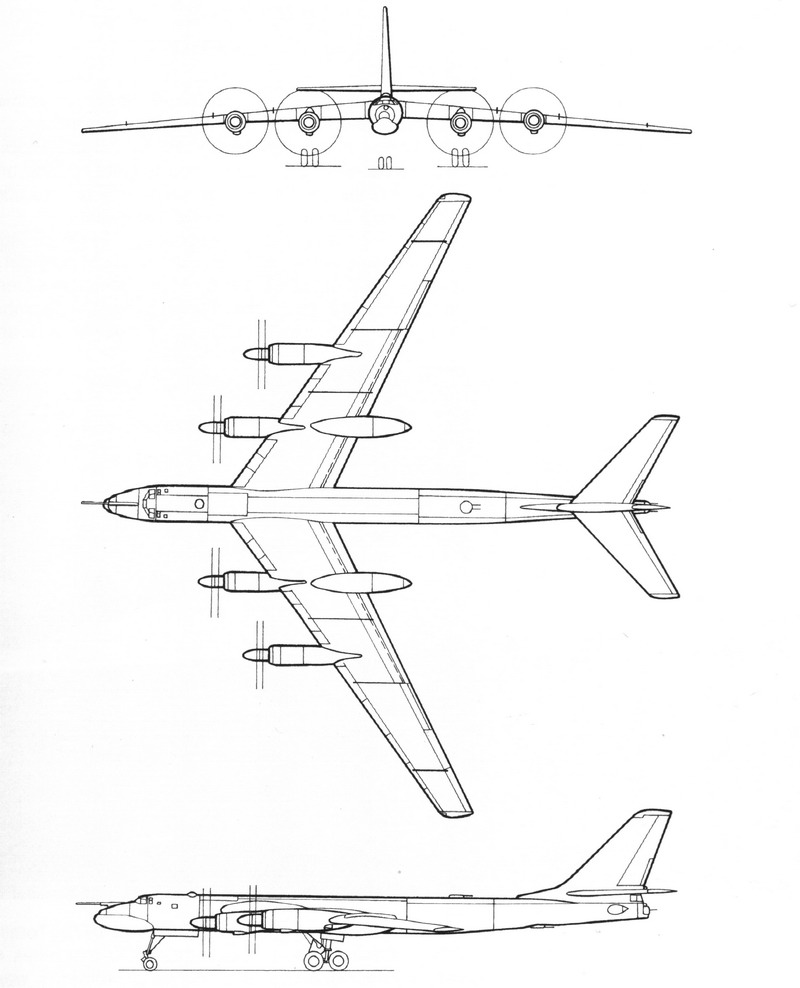